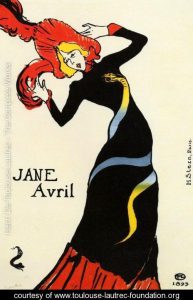 This essay on the life of dancer Jane Avril touches on the history of the asylum and the treatment of neurological disorders in the late C19th.

Summary:
Jane Avril was incarcerated in Saltpetriere asylum as a teenager because of a movement disorder that she later claimed was ‘cured by dancing’. She became one of the favoured dancers at the Moulin Rouge, and a good friend, supporter and muse to Toulouse-Lautrec. Her physical oddness was celebrated by poets and artists of the period. Toulouse-Lautrec’s depictions were of a woman whose dance was irregular and a little uncontrolled.  This essay touches on the way both art and science can understand and document—perhaps even heal—the human condition, but via very different means.

L’Optimisme was a performance-presentation for DANscienCE Week, CSIRO Discovery Lecture Theatre, August 10, 2013. Its first version was a cabaret-biography, created for the National Gallery of Australia ‘City of Lights’ Promenade, March 2013.

Singing the landscape electric [SOP]  a poetic dialogue on feeling one’s self in the world.
Originally written for “Sense of Place: Canberra” , a postgraduate seminar held at UWS Sydney School of Social Ecology, 2001.

The Eye of the Maker–feeling into counter-memory